Hello again to all my readers, I’m glad you came to the site.

My fun while travelling never ends, here’s what I did last week.

That is my version of the Barney ending saying.

So this post is a week overdue. I apologize. Two weeks ago, I went to…San Francisco!!

I had a really nice week, mostly because I got to spend time with my family and also because I met new people. Anyway, I took a flight from Longbeach to Oakland and then drove from there to San Francisco. San Francisco has no space. It is so full of people and buildings. Reminds me of Lagos somehow. Also that week was Fleet week, when people perform stunts with planes in the air in honour of the navy. It was epic. Planes were dancing in the air and doing stunts everyday.

L.A from the sky

About to take off

I went to Stanford to look at the campus with my cousin. My university campus at home is nice, but this was on another level. Firstly the campus is really large; we took 11,000steps (the fitbit was counting).

The church in Stanford

Also, it is beautiful, very idyllic, and just looking around motivated me to want to work hard to go to school there. I bought a Stanford shirt! and a water bottle 🙂

In the evening my cousin made me scallion pancakes. They were delicious. I thought I wouldn’t like them because they have no sugar and they have spring onions (scallions) and salt in them. I also had a huge amount of icecream. I didn’t feel guilty because I reasoned the walking cancelled out the icecream even though I had the icecream later.  But who’s checking?

San Francisco roads are mostly located on hills, so everytime I was in a car my heart was in my mouth because the car would be tilting almost 45 degrees. They were basically roller coaster rides I did not pay for. Like I’m not even joking, from the peak of the roads you can almost see the whole city beneath you.

The next day I went to Google in Mountain View. People, I tell you, the Googleplex- as they call it- is just heavenly. They have gyms everywhere. They have bicycles people can use to move from place to place, and if where you are going is far, you can call for a self driving vehicle to come and get you! Note self-driving. It drives itself. They also have free food in cafeterias, salad bars and micro kitchens for the employees 24/7. They have so many attractions for employees.

I just found out that they named the android OS after sweet treats, so the most recent one is Android Oreo. 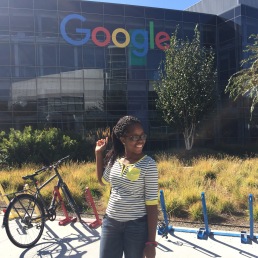 I forgot how to ride a bicycle 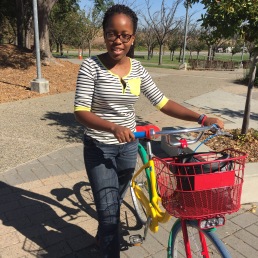 I decided to walk beside it instead

I had brunch with my cousins at a New Orleans style restaurant called Albarays. I had pancake souffle, biscuit and beignets. Beignets are fancy and expensive french donuts. They are very delicious. I was so full, I couldn’t finish my meal. The pancake souffle alone was filling and I still had the biscuit as well. However, I was smart enough to eat the beignets first in case I was too stuffed to eat it later. Smart thinking. See, I could take the unfinished meal to go, but I still decided to try and finish it. DETERMINATION.

My souffle and biscuit 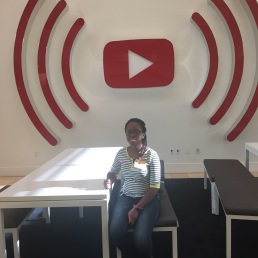 Same day I went to Youtube which is not located in the Googleplex. Also a nice place to work in. They have the option to use the stairs or to go down the slide to reach the previous level. I have two favourite youtubers- Superwoman and Swoozie, and so I was just screaming and making sounds anytime I saw something that had to do with them like their names. Don’t blame me.

I had to leave San Francisco before Sunday because I had an important appointment on Monday morning of the following week. It was not as cold as I anticipated but I always carried a sweater with me in case the weather decided to surprise me. I flew from San Francisco to Longbeach and got back to Los Angeles in the night.

Have a lovely week. Till next time,